Focusing on the GUI would be unwise. Many folks are just now figuring that out.

Want a Free PowerShell Editor? No, Really it's Free...

I've been searching for a PowerShell editor to free me from writing my code in notepad. I've tried a number of them on the market, Primal Script by far was the best! Yet, my 45-day trial was over and my boss is dragging his feet with a purchase. So where do I turn?

Shell Tools was nice, yet another 45-day trial (they extended it another 45-days) yet eventually leading to a purchase. Don't get me wrong I'm not a tight-wad I'm a Tech (o.k. same thing...). I just wanted a simple editor which I found in the last place I thought I would ever look... A GUI Tool for PowerShell.

PowerShell Pro! adopted the philosophy of "teach an man person to fish...” so you would think that promoting a tool that "does the work for you” would be sacrilegious. Not being close minded, I ventured a download and began working with the tool. There were two major findings that prompted me to write this article...

This was actually found by mistake. I started exploring the PowerGUI interface and under the "Tools” menu there it was! It may not be as elegant as PrimalScript or other script editors designed for PowerShell but, it sure beats the heck out of notepad. Did I mention the cost? Free, nill, nada, null, zero, etc... 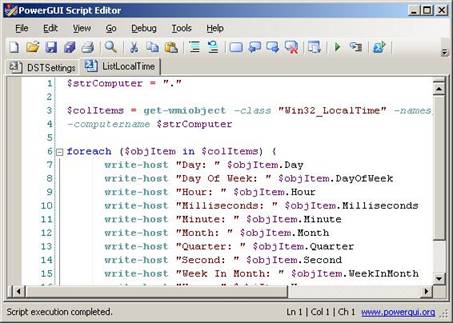 Some of the feature of the PowerGUI Script Editor:

2. PowerGUI is a great learning Tool

Don't get me wrong, I love GUI tools but I don't like to introduce them to those who are beginning to learn PowerShell. I prefer that you get your hands dirty under the hood, which PowerGUI allows you to do. Sure it writes code for you, it also enables you to view the script code written. This is a great way to study code; how it's written and what it's accomplishing.

There is actually another good reason to add PowerGUI to your PowerShell Scripting Tool set. The tool is free, no need to register, no 45-day trial period, and a library of functions you can download to extend PowerGUI's capabilities.

Something to take note of:
I have gotten a lot a flack about the article and tutorial I wrote regarding "Organizing Script Code” using modular scripting. The geeks flamed me for teaching the method of maintaining a Function Library and pasting the functions into a script file. They are all about Dot-Sourcing (which I am too...); for the right situation! Since the PowerGUI tools create one script based on your choices, notice that the code is built using the Modular approach that I taught...